KING OF THE RING in European Championship

Report from European Championship:
Our champion, reigning KING OF THE RING, Clarence Goyeram  destroyed his first oponent, Denis Klochko, where he did exactly what he wanted, Klochko was not near our champion who won this first bout easy with judges score (30-25, 30-26, 30-27)

In his second fight he fought the dutch boxer, Wouter Djokic, in a fight that was a little closer, Claerence won the first round, lost the second, but came back hard in third and won it with 3-0.
Against the french Souleymane Cissokho, it was a much harder fight in distance Goyeram used his reach and dominated his oponent, but Cissokho was very though in the pocket. After a hard fight The King of the ring had won and was ready for the semifinal.

Claerence faced off with Pavel Kastramin from Belarus and controlled him during first round. In the second round Kastramin was the stronger one and Claerence had to step it up in the last round, however the judges scored the fight in favour to Pavel Kastramin.
Claerence won a bronzemedal in European Championship and are now ready and qualified to the World championship. 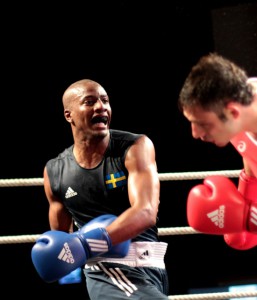